Missing: the art that vanished from Soho's Colony Room

Valuable works by the Young British Artists have not been seen since the infamous drinking den closed its doors 10 years ago. 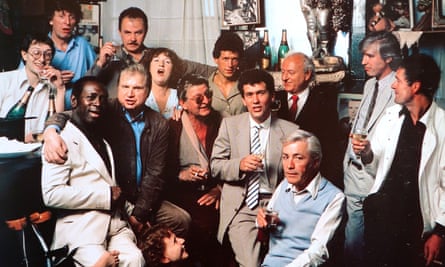 Paintings, sculptures and photographs by some of the leading names in modern British art, including Damien Hirst, Gavin Turk and Tracey Emin, have gone missing. The artwork, which once hung on the walls in the Colony Room, one of London’s most notorious members’ clubs, has disappeared without trace, it has been revealed, since the private drinking den was forced to close in 2008.

“It’s a mystery,” said Turk, who came to fame as one of the Young British Artists (YBAs) in the 1990s. “And so, like the club itself, it is going to become part of the mythology.”

The artist has lost at least two pieces from the club, including an edition of one of his best-known works, a blue plaque bearing the words “Gavin Turk Sculptor Worked Here”. He told the Observer he had originally hoped all the art inside the club had been used to help save it, adding that he missed the place but that it was probably better not to go back.

“It would be horrible,” Turk said. “All that daytime drinking. It was of its moment, really. I thought the works were all going to be auctioned, but it seems that did not happen.” 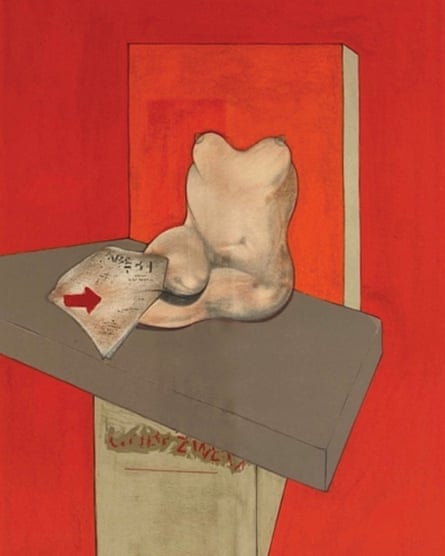 Study of a Human Body after Ingres, by Francis Bacon, features in a new exhibition about the Colony Room. Photograph: © The Estate of Francis Bacon

The Colony Room, located at 41 Dean Street, Soho, was founded in 1948 by Muriel Belcher and became a haven for artists, writers, entertainers and their acolytes. Soho’s artistic elite, including Francis Bacon, Lucian Freud, George Melly and Jeffrey Bernard, were regulars, and many visiting bohemians, such as William Burroughs, David Bowie and Henri Cartier-Bresson, also frequented the green-walled bar room. In 2007, a Bacon portrait of Belcher sold for more than £11m.

After Belcher’s death in the 1970s, the club ran under the stewardship of barman Ian Board until his own death in 1994, when his friend and colleague behind the bar, Michael Wojas, took over as club secretary.

When he closed down the club against members’ wishes in 2008, it prompted protest not just from its patrons, but from English Heritage and the then mayor of London, Boris Johnson. Wojas, who died in 2010, had attempted to hold a fundraising auction, but many of the Colony’s members were unhappy. Not only was Wojas not the official proprietor of the club, they argued, but this meant the paintings were not his to sell.

The auction was stopped after an extraordinary annual meeting was held at Christmas, but by January the club’s rooms had been stripped bare. Not just the art, but the furniture, including a carpet donated by the actress Greta Scacchi, were missing.

Among the most valuable pieces was one of Hirst’s trademark spot paintings, now thought to be worth more than £300,000.

“When art disappears, it is not doing any good,” said Turk. “If it is in some cellar or dungeon, no one sees it. I don’t know if that has happened here. Some of the work was kind of like ‘drunk chat’ art, personal ephemera, but even that is part of the story now. I remember I signed a piece of pink foam for Ian the barman, which he loved. I asked if he did not take plastic, would he take foam, and he gave me a gin and tonic.” 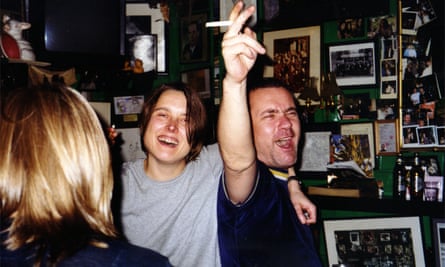 Damien Hirst and Sarah Lucas behind the bar at the club. Photograph: © Pascal Latra

An exhibition celebrating the work of those artists who regularly drank at the club opens in London on Tuesday. As the show was put together, research uncovered the scale of the missing hoard. Tales from the Colony Rooms, at the Dellasposa gallery, will feature work by artists including Bacon, Freud and Frank Auerbach, as well as representing stars of the YBA generation, including Turk, Lucas and Emin. It is curated by the artist Darren Coffield, who has compiled a history of the club based on interviews with people from the Soho art scene.

“I discovered how much had disappeared when I was talking to each of the artists,” said Coffield. “A lot of them asked me whether I knew what had happened to it all after the auction was cancelled.”

The work is not only worth a fortune, Coffield believes, but tells a crucial story about the club’s renaissance at the turn of the millennium.

“This was the accumulated evidence of 60 years of counterculture and the avant garde in this country,” he said. “These works have all increased phenomenally in value, but some just have sentimental worth as part of that time and place.”

Coffield has heard that many of the items were offered to the Tate about five years ago, but were turned down.